The Trebles perform in concert with the Hunter Singers once a term, plus additional performances at the Sydney Opera House Festival of Choral Music, Star Struck, and King Edward Park Carols by Candlelight.

Membership is open by audition for students in years 3-6 at Government primary schools.

The Hunter Trebles rehearse on Tuesday afternoons at Merewether High School between 5.00pm and 6.30pm. Membership costs are subsidised by the Department of Education and fees are $95 per term, with a uniform cost of $90, which includes performance T Shirts, and performance pants.

Students who would like to audition for Hunter Trebles are invited to come to a rehearsal and join in with the group. There will be a brief, informal audition at the end of the rehearsal in which students will sing Advance Australia Fair as part of a small group. 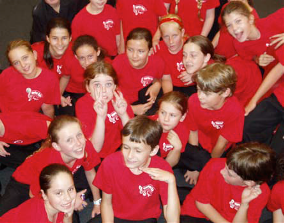